skip to main | skip to sidebar

Chasing Reflections - E-book is out on Craft & Vision 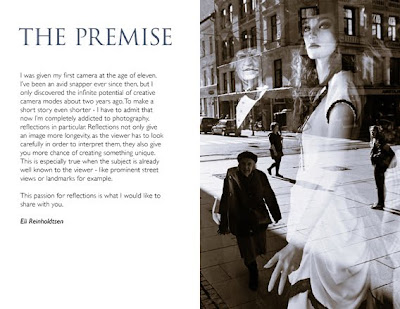 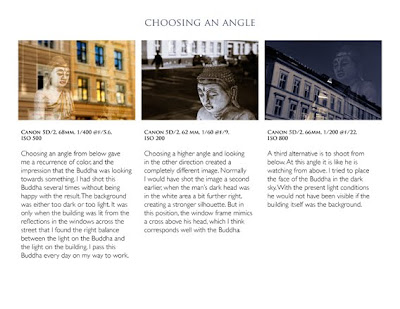 In april David duChemin asked me if I would consider doing an e-book on how I create my reflection images. This is the result, and it is available on Craft & Vision, along with a lot of other e-books for only $ 5  each.
Exploring a subject, like photographing reflections, is fun and provides a lot of learning experience! It is quite different to try and explain this to someone else in a way that makes sense. Writing this book has been a lot of hard work, very frustrating and great fun at the same time.
The last few months my spare time has been spent by the computer or out shooting more images to illustrate a point.
I am very grateful that David challenged me to write this book. I hope you like it!
This is the direct link: Chasing Reflections.
Or you can go via Davids blog HERE to get a discount :-)
Added by Eli Reinholdtsen kl. Thursday, July 29, 2010 No comments: Lisette Model, "Reflections", New York, 1939-1945. Fundación MAPFRE, Madrid
© The Lisette Model Foundation, Inc. (1983).
I came across this image by Lisette Model in Black & White Magazine Issue 75. I haven't seen images of the type of reflections that I like to take before, and was instantly fascinated.

I've googled her name and have come across a few more reflection images. I also came across the Aperture Monograph at half price in a bookstore yesterday. Apparently she has done a whole series of reflections, but I found only maybe 5 or 6 on the web.

Why I love this image I guess is that I think i know I know how she took it! And that it was no coincidence.
The sun is shining down the street towards the women passing. Lisette Model is looking into the window from the left side. I think she also has a low viewpoint.

The main woman is on the "border" between light and shadow and that is why she is half lit. Or something else could cause the shadow of course.

The four black hats are people who are in the shade - looking at whatever is inside the window. They are in the shade, that is why they appear as dark silhouettes.  And because they create a black area in the image it is easier to see the reflection of the passers-by. Could even be the only reason the reflection is visible.

Her focus is set on the lightpole in the background. I assume she had no autofocus. I would have tried to set the focus on the main woman passing instead - but it is often difficult to anticipate what will happen. So this is something that has happened to me as well. Although I will never know if this was her intention. I will never know if it was her shutter speed that caused the woman to be a bit blurred either.

Leaving something left for the viewer to explore is important. Or as I managed to say to someone the other day - serve the starter as a teaser - don't dump the whole boiling main course in the lap of your guest :-)
Added by Eli Reinholdtsen kl. Friday, July 16, 2010 3 comments: 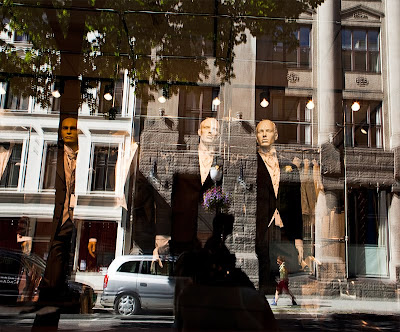 I noticed this window earlier, but the light wasn't right. So I went back at a different time of day to see if the light would be better. But actually I need to come back on a Sunday when shops are closed and there should be no cars parked on the street. I hate all these cars that keep parking at interesting locations!
What I like to continue working on at this location is to wait for some more people to pass in the sun on the other side of the street, and also more people on this side of the street. The time span for the right light here could be less than an hour per day. If it is sunny, that is!
And I have to get that "Photographer Woman" out of the picture. :-)  On this side of the street there is a silhouette of a woman passing in the shade behind me. More of her kind, pleeease!!
Added by Eli Reinholdtsen kl. Monday, July 12, 2010 No comments:

How to be a great photographer 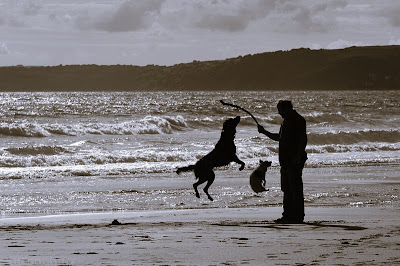 I’ve been reading Sabrina Henry ’s blog over the last weeks and she is doing a series on celebrating success. She has had guest posts from Stuart Sipahigil, Maureen Murphy, Beate Dalbec and Mark Olwick. These photographers have posted views on success and the value of taking risks.

This brought me back to a lesson I learned through my day job.

My day job in short circles around creating successful ERP implementations for medium to large companies. ERP systems simplified are systems to handle for example the financial and logistics transactions for the value chain in a company.

Some years back - prior to launching a project - the members of our project core team were invited to present the proposed improvement project to the management team of a company.

A mini-questionnaire was handed out to the managers in the meeting, and they were asked to rate the main business processes of the company on a scale from 1 to 6. They were not asked to document their rating, just to rate how they felt about each business process. The question was something like; On what performance level is this business process today? And on what level do we want it to be? Assumingly a simple question to answer.

After the managers had rated the processes, the project manager went through the results on the whiteboard. I think the managers were just as surprised as the team members at how their answers differed.

Which of these managers would be most supporting of the project? No rocket science involved here; –that would be the managers wanting to move one two or more steps up the ladder. That would be the managers that wanted to move from 1 to 2, from 1 to 6, from 2 to 5, or even from 5 to 6. Those that felt we were already on the target level, whether it was 2 or 5 – did not see any need for an improvement project. This missing sense of urgency would of course affect their willingness to support the proposed improvement project.

What more became apparent in the meeting; – as a management team they were not speaking with one voice, they did not have a joint vision. They did not agree on the road forward.

I found this a great learning experience which brings me back to the subject of being a great photographer.

The perception of where we are now and where we want to be is something I think we have to agree on within ourself – between the members of our own personal internal management team if you like. The voices in your head! What does it mean to me, to be a great photographer? Where am I now? Where do I want to go from here? What will it take me to get there? This is unfortunately about creating a project plan like any other.

Reaching achievable goals you have set for yourself makes you feel great at what you do, and gives you energy. It is as simple as that.

I love my images and think that they are great. I want to shoot more of them. 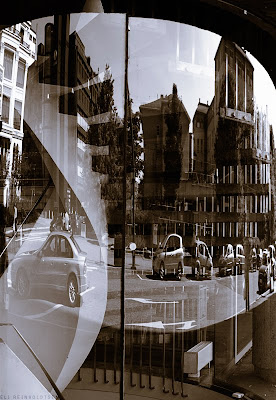 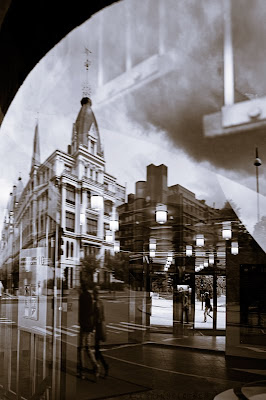 I often pass this glass stairwell walking home from town and if the light is right I can get some fun shots.
Added by Eli Reinholdtsen kl. Wednesday, July 07, 2010 4 comments:

Eli Reinholdtsen
Arundel /UK, Oslo, Norway
Eli is a photographer with a passion for shooting reflections. Her work has got a distinct style and she has a very strong eye. Her first photography book "Folk" was released on Blurb.com earlier this year. This is her blog. Eli also works with implementing ERP systems in large organizations.